Understanding Where Power Comes From in the Workplace

Think of a leader you've known who relied on their ability to discipline or reward people to get things done. Then, remind yourself of a leader who was a renowned expert in their field, or who you really admired for their integrity.

How did it feel to work for these leaders, and which one got the best from you? The way a leader behaves toward you and how effectively you work as a result can both depend on the source of their power. And their power need not come from their official status or title.

Social psychologists John French and Bertram Raven studied this phenomenon more than half a century ago. Despite its age, their research can still help us to understand why some leaders influence us, how prepared we are to accept their power, and – if you are a leader – how you can develop new power bases to get the best from your people.

Not all forms of power have a positive influence.

In 1959, French and Raven described five bases of power:

By understanding these different forms of power, you can learn to use the positive ones to full effect, while avoiding the negative power bases that managers can instinctively rely on.

The Bases of Power

A president, prime minister or monarch has legitimate power. So does a CEO, a religious minister, or a fire chief. Electoral mandates, social hierarchies, cultural norms, and organizational structure all provide the basis for legitimate power.

This type of power, however, can be unpredictable and unstable. If you lose the title or position, your legitimate power can instantly disappear, because people were influenced by the position you held rather than by you.

Also, the scope of your power is limited to situations that others believe you have a right to control. If a fire chief tells people to stay away from a burning building, for example, they'll likely listen. But if he tries to make two people act more courteously toward one another, they'll likely ignore the instruction.

People in power are often able to give out rewards. Raises, promotions, desirable assignments, training opportunities, and simple compliments – these are all examples of rewards controlled by people "in power." If others expect that you'll reward them for doing what you want, there's a high probability that they'll do it.

The problem with this power base is that it may not be as strong as it first seems. Supervisors rarely have complete control over salary increases, managers often can't control promotions by themselves, and even CEOs need permission from their boards of directors for some actions. Also, when you use up rewards, or when the rewards don't have enough perceived value, your power weakens.

The exceptions to this are praise and thanks. We love to receive them and, best of all, they're free to give!

This source of power is also problematic, and can be abused. What's more, it can cause dissatisfaction or resentment among the people it's applied to.

Threats and punishment are common coercive tools. You use coercive power when you imply or threaten that someone will be fired, demoted or denied privileges. While your position may allow you to do this, though, it doesn't mean that you have the will or the justification to do so. You may sometimes need to punish people as a last resort but if you use coercive power too much, people will leave. (You might also risk being accused of bullying them.)

Having control over information that others need or want puts you in a powerful position. Having access to confidential financial reports, being aware of who's due to be laid off, and knowing where your team is going for its annual “away day” are all examples of informational power.

In the modern economy, information is a particularly potent form of power. The power derives not from the information itself but from having access to it, and from being in a position to share, withhold, manipulate, distort, or conceal it. With this type of power, you can use information to help others, or as a weapon or a bargaining tool against them.

Relying on these positional forms of power alone can result in a cold, technocratic, impoverished style of leadership. To be a true leader, you need a more robust source of power than a title, an ability to reward or punish, or access to information.

When you have knowledge and skills that enable you to understand a situation, suggest solutions, use solid judgment, and generally outperform others, people will listen to you, trust you, and respect what you say. As a subject matter expert, your ideas will have value, and others will look to you for leadership in that area.

What's more, you can expand your confidence, decisiveness and reputation for rational thinking into other subjects and issues. This is a good way to build and maintain expert power, and to improve your leadership skills.

You can read more about building expert power, and using it as an effective foundation for leadership, here.

Referent power comes from one person liking and respecting another, and identifying with them in some way. Celebrities have referent power, which is why they can influence everything from what people buy to which politician they elect. In a workplace, a person with referent power often makes everyone feel good, so he tends to have a lot of influence.

Referent power can be a big responsibility, because you don't necessarily have to do anything to earn it. So, it can be abused quite easily. Someone who is likeable, but who lacks integrity and honesty, may rise to power – and use that power to hurt and alienate people as well as to gain personal advantage.

Relying on referent power alone is not a good strategy for a leader who wants longevity and respect. When it is combined with expert power, however, it can help you to be very successful.

You can see our infographic of French and Raven's theory here: 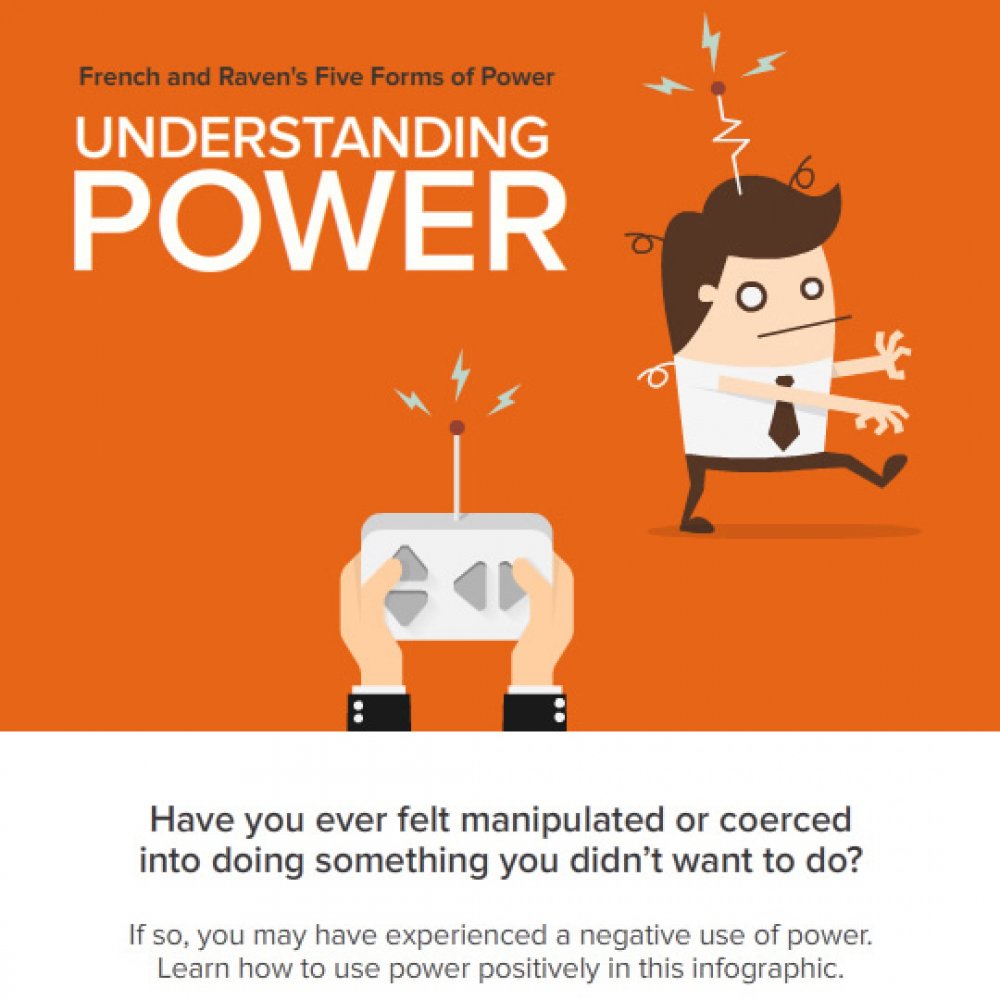 And, six years later, added an extra power base:

Anyone is capable of holding power and influencing others: you don't need to have an important job title or a big office. But if you recognize the different forms of power, you can avoid being influenced by those who use the less positive ones – and you can focus on developing expert and referent power for yourself. This will help you to become an influential and effective leader.

Apply This to Your Life

Subscribe to Mind Tools before November 30 and get 30% off!

Invest in yourself this Black Friday.

Join the Club Now
1 Day to Go!
Allow Your Team to Learn From Home