Building Both Profits and Reputation

Apply all four levels of the pyramid, but in a shade that's true to you.

"I'm here to show the world what respect and inclusion are all about," says Dustin Plunkett. He's an athlete and coach with intellectual disabilities, and now, with the support of Bank of America®, a TV sports analyst. He's speaking about the bank's partnership with the Special Olympics™.

Why would a financial business bother to invest time, money and effort in promoting diversity and inclusion in the community? Is it just trying to look good? How do we know the project is worthwhile? And isn't it something that only large corporates can afford?

In this article, we'll look at what corporate social responsibility (CSR) is and explore one key model for implementing it in any size of organization or team.

To survive, every business must at least make a profit and meet its legal responsibilities. But what it does with those profits, and what higher values it demonstrates among its employees, community and market, will vary enormously. CSR is all about being aware of this wider context and thinking about the company's moral obligations towards it.

CSR has been talked about since the 1960s. But its history can be traced back much further than that. For example, the 19th-century English industrialist Titus Salt made a fortune from the wool trade. But he is celebrated for building a village to house his employees and their families. Salt was engaging in CSR, even if he wouldn't have used the term.

Organizations have quickly realized that "doing the right thing" can bring them benefits too. Salt's mill workers enjoyed much healthier living conditions than their peers, which made them more reliable at work. And nowadays, a business that invests in new technology to stop polluting its environment could make big savings in fuel costs.

And there's one more benefit to CSR: being seen to go "above and beyond" what's expected can improve a company's reputation both internally and externally, leading to employees and customers alike becoming more engaged.

Professor Archie Carroll published his Pyramid of CSR in 1991, and it has become a widely used tool. He asserted that CSR "can only become a reality if managers become moral instead of amoral or immoral." Let's see what he meant. 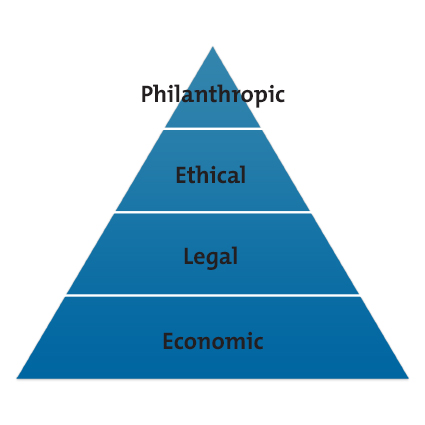 The pyramid describes a hierarchy of responsibilities that, together, make up CSR:...

This article is only available in full within the Mind Tools Club.

Already a Club member? Log in to finish this article.

FREE 36-page workbook to help you beat stress and stay calm under pressure. Subscribe before midnight, Nov 4 to download for free.

Get Free Toolkit
1 Day to Go!
Allow Your Team to Learn From Home